In January 4th class studied magnets and magnetism. They learned about magnetic poles, magnetic fields and which metals are magnetic. They looked at uses of magnets in everyday life – for example, in the doors of fridges and in maglev trains in Japan.

The pupils really enjoyed the practical tasks they had to complete as part of the unit. They used magnets and iron filings to look at the magnetic field. They also designed race tracks on cardboard and then used magnets to move toy cars along the race tracks without touching the cars. 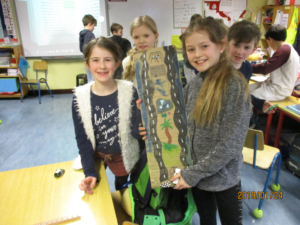 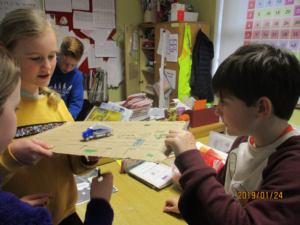 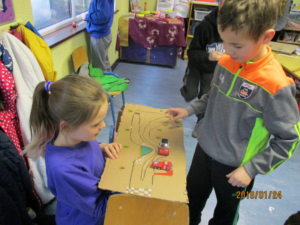 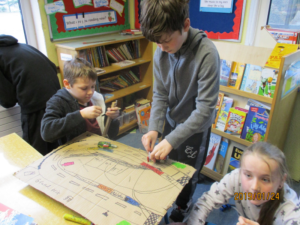 Here is a write up by David on one of the activities:

First we got put into groups of four. One group was in a three. Next we were given a piece of cardboard. We had to draw a track on it. Then we picked our cars. Next we got the geomag and some sellotape. We tried to sellotape the geomag onto the cars. It was really hard but most of us managed to do it. Once we had the geomag on the car we put another piece of geomag on the ruler. Next we put the car onto the cardboard and the magnets under the cardboard and then moved the cars with the magnets. It was great! A lot of people raced but only a few won.

We use cookies to ensure that we give you the best experience on our website. If you continue to use this site we will assume that you are happy with it.Ok, I accept cookies on this sitePrivacy policy